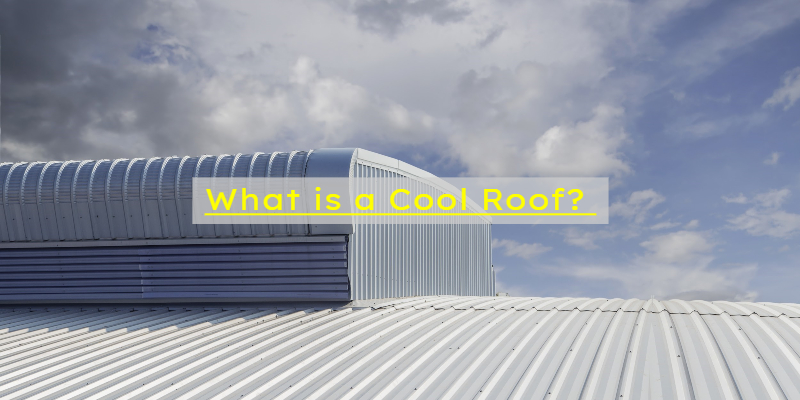 Color is a critical factor to consider when choosing roofing materials for homes and commercial properties for many reasons. But for most people, the question of color is often an issue of aesthetics.

However, did you know that the color you go for can affect how much you pay in heating and cooling costs? The growing need for energy efficiency is making many contractors and consumers opt for light-colored options. But conventional roofing materials can also be transformed into cool roofs while still retaining their darker hues. 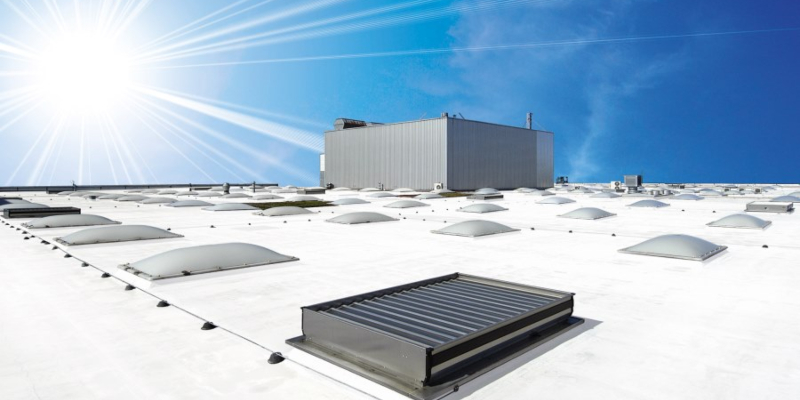 Cool roofs reflect UV rays better and dissipate heat faster. As a result, the heat that would have otherwise spread into the interior goes back to the atmosphere. That means you use less energy and money on cooling.

In this article, we look at what makes up a cool roof. We also examine how it can help you save money and energy.

What Makes up Cool Roofing?

Cool roofs come in many designs. They include sheet coverings, metal roofs, reflective tiles, shingles, and reflective paint. A roof is said to be cool if it has a high solar reflectance and thermal emittance. But what do these terms mean?

Solar reflectance is the ability of roofing material to reflect infrared radiation from the sun. The roof absorbs this radiation as heat, which later permeates into the interior. According to Lawrence Berkley National Laboratory, if the roof reflectance increases by one percent, the surface temperature decreases by 1 degree Fahrenheit.

On the other hand, thermal emittance refers to the ability of a material to release absorbed heat back to the atmosphere before it spreads to the interior. Emissivity is essential, but it is solar reflectance that contributes more to the coolness of your roof. Both properties are measured on a scale of zero to one, with one being the highest and zero the lowest.

Solar reflectance Index, abbreviated as SRI, is the capacity of a roof to reject solar heat. It combines thermal emittance and solar reflectance, and we measure it on a scale of zero to 100, with zero being the lowest SRI and 100 the highest.

Roof systems consist of one or more layers of material. They have different types of surfaces, but they are all designed to act as reflectors. Here are the options.

A coated roof contains either white or reflective pigments that bounce off sunlight. These coatings act like thick paint by protecting the surface from ultraviolet light and guarding it against chemical or water damage. If the roof is already in good condition, the coating can help extend its service life.

Built-up roofs come with multiple layers. There is a base sheet, several fabric reinforcement layers, and a protective top layer (often dark in color). You can transform the top layer into a reflective surface in different ways, including using mineral granules or coating it with sheets of reflective materials.

These consist of one or multiple layers made from rubber or plastic. They are either surfaced with a smooth finish or with mineral granules. When you coat built-up roofs with modified bitumen sheets, you create 'hybrid' roofs.

These are prefabricated sheets used to cover roofs. Once you roll the sheets on top of the roof, you can attach them using chemical adhesives, mechanical fasteners, or ballast. Examples of such membranes include PVC, TPO, and EPDM.

Tile consists of clay, concrete, or slate. Tiles made from clay and slate will have varying colors depending on the composition of the earth. However, some are naturally reflective and can make cool roofs. Tiles that are glazed or coated for aesthetics and waterproofing can also transform into cool roof tiles.

Manufacturers make these roofs by combining two liquid chemicals. These chemicals then react and expand to become a single solid piece that covers the roof surface. A traditionally reflective coating is later applied. Without a coat, foams are vulnerable to UV radiation and also susceptible to physical and moisture damage.

Some metals are natural solar reflectors but are often poor thermal emitters. It is no wonder that most of them do not meet the standards expected to qualify as a cool roof. However, some have SRI values that are high enough to be used as cool roofs. You can increase the SRI, thermal emittance, and solar reflectance of metal by applying paint finishes, granular coating, or natural metallic finishes.

Shingles are overlapping panels. They consist of materials such as asphalt, wood, and polymers. Asphalt shingles consist of specially coated granules that act as solar reflectors. Although you can cover your existing asphalt roof, manufacturers do not recommend that.

Is White the Only Color?

When most people think about a cool roof, they often picture a white-colored one. However, today, we have cool roofs that resemble standard products even though they are more reflective in the infrared spectrum.

This means you do not have to sacrifice aesthetics to enjoy the benefits of a cool roof.

Such roofs utilize pigments that reflect solar radiation better. Here, you can have darker, richer hues such as brown and forest green. You can also find reflective coatings on metal, shingles, and tiles. 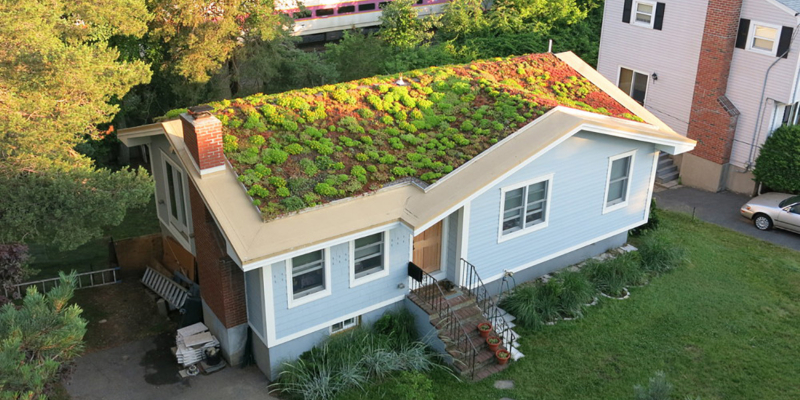 Another alternative to white-colored options is installing a green roof. This means placing plants on top of the roof. However, white roofs are often a more cost-effective option. Still, a green roof can offer other benefits other than saving energy like stormwater management. They also have a unique aesthetic appeal.

Will a Cool Roof Cost More Than Standard Options?

Installing an energy-efficient roof is slightly more expensive than installing a conventional one. However, converting an existing roof to a cool one could cost more.

According to the EPA, the cost premium for buying products for cool roofs can range from 0-10 cents per square foot. For instance, homeowners who want cool roof coating will have to cough up between $0.75 and $1.50 per square foot for a low-slope roof. Those who prefer single-ply membranes should expect to pay between $1.50 and $3.00 per square foot. However, it is essential to note that costs may vary depending on location.

If you want to convert an existing roof, there are two options on the table, each with varying cost implications. First, you could opt to retrofit it using a specialized heat-reflective material. Secondly, you could cover it with tile coating or any other waterproofing material.

You can recoup some of the extra costs incurred when installing a cool roof from the savings made after reduced energy costs. One study estimates that installing cool roofing can reduce the energy used for cooling a building by 40%. With such efficiency, a cool roof could pay for itself in a few years.

If you are installing a new roof, weigh the costs of installing a cool one versus a conventional one. But also consider the potential benefits of the former. The following table compares the average cost of buying and installing cool roofs versus metal and asphalt roofs for a single-family home in the US (2,531 square feet)

How Much Will the Cool Roof Save on Your Energy Bill?

The primary benefit of installing a cool roof is to reduce energy consumption and costs. Unlike standard options, cool roofs do not absorb much heat. That means your home remains cool and depends less on the air conditioning unit. Consequently, you conserve energy and reduce your cooling costs, especially during the summer.

Reduced cooling loads result in a reduction in building operation costs. You should expect to save $0.00-0.13 per square foot every year. However, how much you save will depend on factors such as the reflectance of your roof, climatic conditions, insulation levels, the efficiency of the HVAC system, and utility rates.

How Else Can a Cool Roof Save Money?

Apart from saving on energy bills, cool roofs can help you cut costs in other ways.

When a cool roof significantly reduces cooling loads, you could consider downsizing your HVAC equipment. Replacing your air conditioning equipment could save you between $0.03 and $0.07 per square foot. Remember, downsizing could reduce cooling capacity if you fail to maintain the roof regularly.

You can also save more through government rebates and incentives. For example, consumers with residential projects could benefit from a 30% federal tax credit of materials costing up to $1500.

However, incentives for non-residential buildings may not be as straightforward since they may involve other efficiency measures apart from cool roofs.

You can visit the CRRC website to check whether there are such opportunities in your city.

Other Benefits of installing a Cool Roof

Finally, decreasing the temperature of your roof can lead to a longer lifespan. Cool roofs are made of materials such as plastic and polymers. Ideally, however, a cool roof should last longer than a traditional roof of the same material.

Which Region is the Energy-Efficient Roof Suitable for Use?

Cool roofing can reduce energy costs in the southern climatic regions of the United States. However, cool roofs can also benefit residents in colder places such as the west coast, where there are more heating degree days.

There is a notion that cool roofs are counterproductive in colder regions due to the winter heating penalty. A cool roof can increase energy use during winter since it reflects the heat that could have warmed the house. But the increase in energy use is not as severe as in the summer. Moreover, it is not significant enough to overshadow the net savings.

The heating penalty is less severe during winter for several reasons. First, there is a lower solar angle during winter. It is not like in the summer where the sun hits the roof directly. Therefore, absorption would not matter as much. Also, there is less solar energy during winter since there are more cloudy days than sunny days.

Furthermore, snow covers the entire roof during some winter days. This snow reflects energy from the sun, eliminating the need for having an absorbent roof in the first place. Lastly, people often prefer cheaper ways of warming the house to electricity during winter. These include natural gas and oil.

Accumulation of dirt, debris, water, and growth of mold and algae could reduce the solar reflectance of your roof. Although cleaning can restore up to 90% of the initial reflectance, it can become expensive in the long run.

This is why sloping roofs are great. They are less likely to accumulate dirt and debris since these are easily washed off by rainwater.

Maintaining a cool roof is the same as a non-cool one. But if you are going to clean it, be sure to follow the cleaning recommendations from the manufacturer. For instance, using harsh chemicals and power washing could cause irreparable damage.

A cool roof is an energy-efficient option that can save you a lot of money in energy costs. But the benefits of energy-efficient roofing extends beyond the immediate building. It reduces carbon emissions and electricity peak demand rates. It can also help mitigate the urban heat island effect.

Cool roofs come in different designs and materials. If you want to install one, you will have to pay slightly more. However, converting an existing roof to a cool one will cost you much more.

You should perform a cost-benefit analysis before deciding to install a cool roof. Consider factors such as your roof insulation, the climatic conditions in your area, the efficiency of your air conditioner.